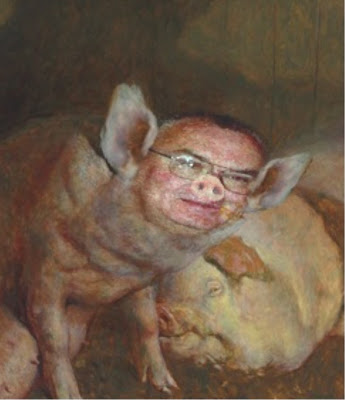 "I seen this before, I mean I read about it in a Plastic Man comic!" Rodney was an excitable guy who did sidework cleaning offices after hours. "I was nosin' around the City Hall closets lookin for this awful stink and there they were man!" He was shaking like a child in the rain.
"Hold on Rod ,what are you talking about?"I said, trying to calm him down. "Circe changes Plastic Man into an animal and now I seen it myself. Mr. Harris the City boss was turnin into a big ole hog!"
"Wait a minute!"I interrupted. "Are you trying to tell me that Marvel comics is ripping off story lines from the Iliad?"
"No! I mean ,what am I gonna do? I cant go back there! Man it was creepy.....It looked right at me with this half smile and there was another one half asleep and completely changed lyin' right next to him. That one was real pale, so I think it was the city attorney Mr. Brown!"
Rodney has been known to partake of the giggle juice quite frequently but he seemed stone sober tonight. "Man this has got me wound up like a douche" "What?" I said. "You know, from the Manfred Mann song." "No Rod, I think that it's 'wrapped up like a deuce'. Rod stopped shivering "That doesn't make sense",said Rod. "Well neither does............never mind! Just go home , get some sleep and do not ,I repeat, do not tell anyone what you saw until I talk with you again,Ok? ""You betcha." said Rodney who had fairly composed himself. He squinted and looked beyond my shoulder.I knew what was coming."Hey, I know I owe you a bunch already but you got ten dollars to spare?" I gave Rod two fives knowing that he's going to head over to the nearest guzzle joint on St. George Street. He'll repeat his tale and everyone will laugh except maybe a guy at the end of the bar paying close attention and wearing a city meter reader uniform. Rodney, for my benefit,had the courtesy to head in a westerly direction away from the tavern. He'll double around to the bar a block after he's out of my sight. Poor little guy. He just may have seen his last livestock. Guys like Rodney aren't missed much when they are not around. Let him have his shot and a beer or two. I'll check on him tomorrow at his hundred dollar a week fleabag over off San Marco............To be Contd
Posted by Karl at 9:50 PM