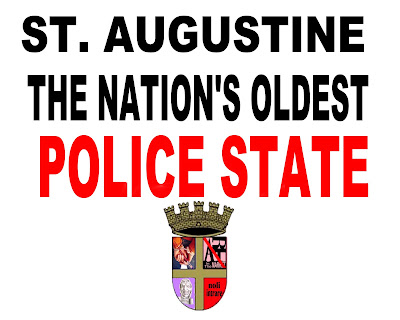 The City Commission last night voted unanimously to prohibit artistry (the creation of visual art) and art sales in the nation's oldest park, The Plaza de la Constitucion. An amendment was made to refer to visual artists as "street performers" and this seems to satisfly the commission. The Federal courts protect visual artists and their wares as "fully protected" First amendment wise whereas street performers do not have such protection. This is their awkward way of defying a recent Federal Court order.
These meetings and the three minute public comments beforehand are simply an illusion of public participation. The commissioners who are sworn to uphold the U.S. Constitution purposely vote in a blatantly unconstitutional "law" knowing that the artists have limited resources and energy to take it to court again. If we did...they would lose and once again write an illegal ordinance......after all it's not their money.
According to a bronze plaque in the S.E. corner of the Plaza,the Plaza de la Constitucion is where the British hung John Adams in effigy, yet they permitted the Patriot captors to celebrate the Fourth of July in the same location. Martin Luther King rallied his supporters there in '64 and the infamous KKK held nightime rallys against equal rights during the same time period. Recently, President Obama's inauguration was celebrated in The Plaza. One commissioner called it a "partisan "rally and wanted to disallow it. As the Supreme Court has written "Public parks are quintessential public forums where citizens may engage in constitutionally protected expression"
To those who continually harp that the sale of artwork is "commercial activity" and is not permitted, we say......this is opinion contrary to well established case law. Your "opinion" does not change this.
Posted by Karl at 12:39 PM