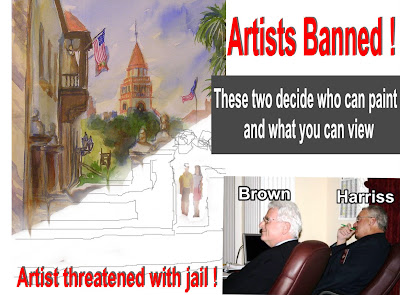 Photo by J.D. Pleasant
City Attorney Ron Brown and City Manager William Harriss
"En Plein air is a French expression meaning "in the open air"and refers to the act of painting outdoors with the artist's subject in full view. Plein air artists capture the spirit and essence of a landscape by incorporating natural light color and movement into their works." The Crescent Beach Paint Out Oct.2009.

For the past five years Island Fine Art in Crescent Beach has invited regional "plein air artists" to our town for a Paint Out. Artists scatter throughout the area setting up their easels in locations that they want to capture on canvas or paper. At the end of the day everyone meets and discuss their works over dinner and cocktails. At the end of the week works are hung and the public is invited to view and purchase those works done on location or plein air.

A watercolor artist from Winter Springs set up her easel in the plaza to paint the east facade of the Government House. In the midst of the painting, a police officer approached and told her that she must leave or be arrested. The artist first assumed that this was a joke...but no she found out that the law in St. Augustine prevents "artistry or the creation of art" in the Plaza de la Constitucion. The artist left with her watercolor unfinished.

Two days later she was perplexed when she saw a wedding photographer using the same view as background for the couple's album pictures. Surely the photographer considers his work artistry and so do we. Performances are also not allowed. The ordinance makes no exception, though the city has sanctioned Christian concerts and secular concerts almost every weekend. By the way, artists are now referred to in all documents as "street performers". The false logic of this is that street performers are not covered constitutionally as "fully protected" (it has to do with noise) while artists are fully protected constitutionally. Ergo...just call 'em something else.

Crime is caused by laws. Any action is simply an action until there's a law against it. "Criminals" are invented by legislators; fewer laws, fewer law breakers. Suvo