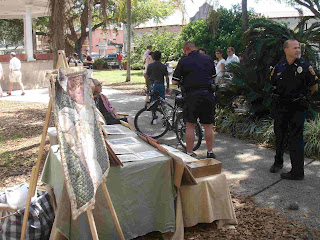 "Freedom of Expression in St. Augustine depends upon whether or not (Asst. City Attorney)Robin Upchurch approves of it or not."-- Tom Cushman, defense attorney for the St. Augustine Artists on Trial.

ST. AUGUSTINE, FLORIDA, USA -- In an unprecedented slap-in-the-face to the U.S. Constitution, St. Augustine city attorneys, Ron Brown and Robin Upchurch, repeatedly stated at the trial of the St. Augustine Artists that they intend to ban Free Speech from the city's park altogether.

During the trial, city attorney Ron Brown admitted that he and assistant city attorney Robin Upchurch are currently and frequently "micro-managing" who can and can't exercise their First Amendment Rights in St. Augustine's City Park, the "Plaza De La Constitucion."

Testimony given by police officers under oath revealed that the Police were given directions in the form of a two page memo from assistant city attorney, Robin Upchurch, as to what Upchurch believed to be acceptable art. Upchurch, who has no formal training or education in art, directed the Saint Augustine Police Department in a March 23, 2007 memo, as to what mediums artists could and could not use that would be acceptable forms of art to her, that could be shown in the City's park.

On March 31, one week after Upchurch issued her memo to the St. Augustine Police Department, the police raided the city park and began citing and arrested artists whose art work did not meet Upchurch's standards as acceptable art.
Referring to the artists who show their work in the city park Upchurch stated, "It has become a huge problem."

Confronted by Judge Tinlan that the city's ordinance may be unconstitutional because it is not "content-neutral," Upchurch said that the city was "making an exception" for the artist's First Amendment rights by allowing them to show their art work in the city's park. At one point Judge Tinlan asked Upchurch if she would rather do away with the First Amendment language in the ordinance, what Upchurch called an "exception," to the city ordinances that allows the artists to show their work. "Absolutely, your honor," said Upchurch. At that point, and throughout the remainder of the trial, Upchurch repeatedly said she would recommend to the city commission "First thing tomorrow" that the city do away with the language in the ordinance which allows artists to show their "paintings, photographs, prints and sculptures" in public, effectively banning the artists' Free Speech from the city's park altogether.

Upchurch and Brown, repeatedly made reference to a well documented national case, Bery V. New York. But while referencing the case, Upchurch and Brown failed to acknowledge that in that case the Federal court ruled it is "unconstitutional to require licenses for artists to display and sell their work in city parks." St. Augustine's city ordinances currently require a permit for the artists to show their work, however no permits are currently being issued by the city, and the city has up to now, been "making an exception" for some artists who meet their criteria as "acceptable" artists.

City governments may restrict the "time, place, and manner of speech," provided that the law is narrowly tailored "to serve a significant government interest" and leaves open alternative channels for communication. City attorneys Upchurch and Brown stated during the trial, that the artists have other alternatives channels, other areas in the city where they can go to show their art work, and that they intend to kick the artists out of the city park.

Referring to the city's intent to Ban the Artists, "What good is having a Constitutional Right, a First Amendment Right to Free Speech, if the St. Augustine Government only allows you to speak in a place where no one can hear you," said Bruce Bates, one of the artists who currently shows his work in the city park.

"The city would like us to go to the back of the bus," Bates said, referencing a well-known civil rights case during the 60's, "And we're not about to let a hand-full of neo-fascists roll back the calendar on Your First Amendment Rights, after all, Artists Rights, Are Your Rights Too."
-->From: http://mysaintaugustine.com/
Posted by Karl at 9:15 AM