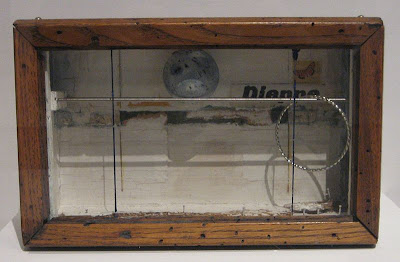 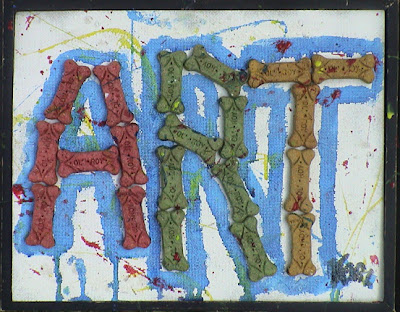 Karl The Dog, Snacks As Art ,2007,Private Collection
.....drawings or paintings applied to paper, cardboard, canvas, cloth or to other similar medium when such art is applied to the medium through the use of brush, pastel, crayon, pencil, spray or other similar object... 22-10 of City of St. Augustine City Code defining what art they feel is protected by the First Amendment.
Assistant City Attorney for St. Augustine Robin Upchurch stated in court last Wednesday that artists cannot sell dog treats and therefore logic follows that artists cannot frame dog treats and call it Art. This was big news to Karl who had been working on his assemblage for over a week.

As the three artist defendant's attorney Tom Cushman says, "The city has no business telling artists and the public 'What is Art'." We say that Karl's above artwork carries the same First Amendment protection as the Jasper Johns Flag. Oddly though , the city's convoluted and contradictory code provides that a photo of the above work is protected speech but the original is not.

The current trend of student's education being specialised, giving short shrift to liberal arts is beginning to cause problems. Our cultural "dumbing down" is coming home to roost.

"Those news guys are a lot shorter in real life"

"You can create a sculpture with marble or you can use it for a bathroom counter. It depends upon what you do with the media not the media itself." Fiber artist's Salas' testimony excerpt from last Wednesday. Upchurch's response, "They are made differently." Our response "Yes, yes they are."

"Without a citation I have no standing in court", Suvo to Officer Etheridge on police tape.

"He has no standing in court !" , City Attorney Robin Upchurch finger raised to the heavens repeating Suvo's remark while viewing the tape.