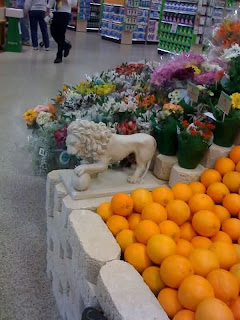 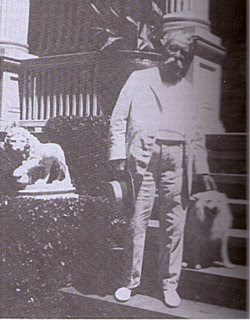 We were sent the top photo recently with no reference to it's location. Previously, we published the photo circa 1923, of Henry Flagler's good friend Dr. Andrew Anderson whose benevolence gave the city of St. Augustine it's few public art sculptures such as The Ponce De Leon bronze, The American Legion flagpole base and the birdbath in the Plaza. He commissioned the lions for our bridge completed in 1927
The old photo shows a maquette of one of the giant lions that graced the western entry to the bridge. It sat on the balustrade of the front entry to his home ,Markland still there on King Street. It's interesting to note how much Dr. Anderson's pet dog has a lion like look.
The sculptor was the Italian Raffaello Romanelli whose family still casts bronzes in Florence.
So what happened to the porch lion? Is that it in the photo on top? It appears to be in a grocery store display. We don't know if it is paper mache or stone. It kind of matches the lion pedestaled on the northern end of the bridge entry. History detectives.....can you help?
If we are incorrect with any"facts" please let us know
Posted by Karl at 11:44 AM