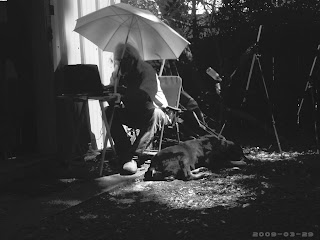 A true artist should never be bored. Waiting to go out to show their works on the streets of St. Augustine ( if the courts decide in their favor) some of the "artists" get distracted. That's me on the ground ( where else?) waiting for Suvo to actually "Do Something!"

He thinks that he has discovered a revolutionary way to compose poetry by using random words that are computer generated. Look at this:

The sinister nun leaps upon doggies with grabby the City Manager and coconuts.

Whilst the Commissioners rant and fertilize the barren ground with mutant seed.

We haven't seen such crap since Bukowski ! Suvo used the AUTOMATIC IDIOM INANITY EXTRUDER with the exception of a few words added by his own ennui saturated mind. It's not hard too believe that some think Suvo a boozer is it? He's actually flying on highly sugared iced tea and Hershey's Special Dark chocolate bars.

* I seem a little overexposed there on the ground. It was unintentional, believe me.