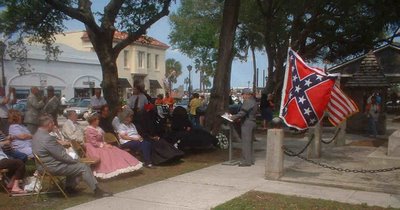 Confederate Memorial Day was celebrated in St. Augustine last weekend. Shortly after the Civil War, revisionist writers such as Gen Jubal Early started the myth of the "Lost Cause". whereby all Johnny Rebs were courageous, the dead were martyrs to the cause of freedom, the women were chaste and the faithful slave defended their masters. Such nonsense. The Southern culture ,if there was such a thing was based upon the evil institution of slavery. The first paragraph of each secession proclamation says so. There continues to be the delusion that the old days were better. See here and here
Posted by Karl at 6:47 PM