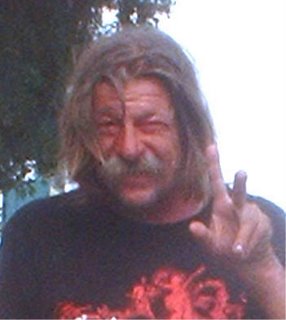 The actorRichard Boone played Paladin in the 60's TV show, "Have Gun Will Travel". When I was a kid,I had these business cards with that slogan printed on it . He and Matt Dillon from "Gunsmoke" were my heroes. Paladin rarely killed anyone and was usually hired by a rich land baron to scare off settlers. After finding out that the settlers were in the right and the land or cattle baron was unscrupulous, he switched sides. I wondered back then, how he ever collected on his fee. I guess that he got it in advance and cheated the big guy out of it without delivering the expected result ( Get em outta here!). Is it OK to cheat a bad guy? He lived in high style at the Carlton Hotel in San Francisco and had a Chinese houseman that he called Hey Boy. Jeez, can that be any more demeaning? What happened to Paladin after the big earthquake in 1909? We need a movie sequel for us mid baby boomers. This homeless guy is not Boone but is just as homely and from his looks could be his son. Richard Boone died here in St. Augustine in 1981 More on Boone Here
Posted by Karl at 4:02 PM