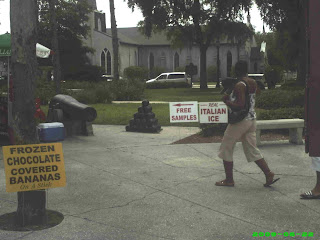 Federal Judge Howard's May Court Order in favor of the artists included these words.".....the relief sought was specifically limited to enjoining the enforcement of the Ordinance against visual artists"
So the City administration who created the original ban because they did not like the "flea market" atmosphere of merchandise peddlers has now decided to allow a free for all of vendors with gasoline generators and large displays back into the Plaza de la Constitucion. They insist that they cannot tell the difference between a painting and a frozen banana.
Does any one have any idea why the City of St. Augustine would act so much against the public opinion Do you think that this is showing contempt of the Federal restraining order?
These photo's were taken last Saturday 6-20. The Plaza had four visual artists and nine merchandise vendors set up.
Posted by Karl at 2:15 PM