Why The City Fights So Hard 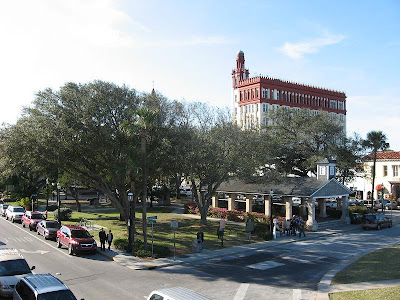 We artists who have been asserting our rights to display and sell paintings, prints, sculptures and photographs in the Plaza have been accused , more than once of being naive. "You can't fight City Hall", "It's a losing battle","The City has all of the resources to continue the assault forever".

We raised money for this battle dollar by dollar holding a garage sale , putting out coin boxes (and getting jailed for this) and accepting money from strangers who believe in our fight for artists rights.

It has been tough , but we now have a Federal temporary restraining order keeping us out of jail. The City administrators told the Commissioners that Ordinance 22-6 would still be enforced against mercantile vendors, jewelry sellers and flea market products. They did not do this. Call City Hall and ask them who can sell on public property and they will say (city employees words) "It's a free for all". Their motive is clear. The flea market returns....."See we told you so", they will say. Is this good faith? Their concern for the welfare and ambiance of the historic plaza is nil. Disregarding the Federal order, the City Attorney gives a higher credence to a St.Johns County judge who wrote a poorly written and confusing decision two years ago in St. Augustine vs Travous. The Southern "ole boy" network is still alive here, disregarding Federal orders and making their own in the venal interests of a few businessmen ,landlords who have tried to maintain control of their minimum wage paying, high rent empires.

Now these above described St.Augustine "boosters" have dollar signs in their eyes thinking about the City's 450th anniversary in 2015. Private funds mixed with government funds, committees, ad hoc jobs for the family, expenses for more "informational" trips to Spain, it will all be there.

One of the basis for our (the artists) lawsuit against the city is to prevent the "privatization" of the citizen's public properties. This is a classic way to raise civic monies in tough economic times.What! They will sell the Plaza to private interests? Yes, and they will tell everyone what a great deal this is for the taxpayer. Public /private partnerships to control and maintain toll roads is an example. Twenty four community libraries in the country are now being eyed as a model for others. They are run by a private company at less cost to the taxpayer but with policies that are antithetical to the purposes of a town library. The private company expects to profit financially from the citizens. Instead of tax revenue from the government coffers they will go right for your wallet to run what has traditionally been a public service.

BIDs are quasi governmental entities formed of businesses with the authorization of the local government or municipality. BIDs provide services which formerly would be provided by the government such as policing services and street maintenance. There is also very little public access to the accounts of the BID companies despite the fact that the vast majority of their income is derived from public taxes

N.Y.C Mayor Bloomberg awarded a long term lease in Manhattan for a friend to build a restaurant on a portion of Union Square. Members of A.R.T.I.S.T. (Artists Response To Illegal State Tactics) were instrumental is getting an injunction stopping construction . The project is in limbo but you will still see the beginning construction ready to go if you visit NYC. There are numerous examples around the country concerning this wresting of public assets to private concerns. You will begin to find this in St. Augustine as we look for ways to fund our showcase 450th anniversary.The devolution of limited political authority to the private boards of these districts effectively privatizes the public spaces of the city

An important role is played by public space in a democracy as a site of free speech, association and protest. There is concern that overt control of Business Improvement Districts (BID) by business and property owners results in the privileging of the interests of those people over the democratic interests of society at large.

Do not let this happen in the nations oldest city! Keep The Plaza Public ! This is our real fight!