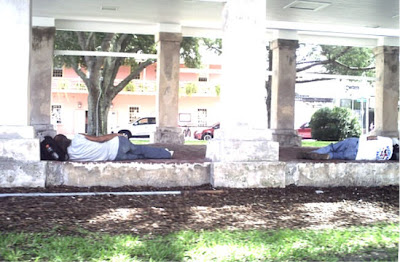 Two "Sleeping Man" installations in the Artist Market
The ordinance prohibiting visual artists from painting or offering work for sale in public spaces was illegally modified last year by creating a 75 dollar monthly lottery for spaces between the pillars in the Slave Market. Painters were essentially.banished to "the back of the bus". Some in City Hall probably thought that this would be an effective way of removing the homeless from the Market.
The above photo taken yesterday illustrates two of the six spaces for "street performers" as the painters are labeled on the photographic license to be worn at all times while displaying their works. The artists are loathe to ask these people to leave and calling a police officer is not in our agenda. Finding "public shade" is a difficult thing for these guys in these high 90 degree temperatures. There is a resentment among the artists that the City of St. Augustine is using them to "relocate the homeless".

The City of St. Augustine has a number of issues on the front burner at this time. Among them is further regulation of horse carriages, a growing homeless problem and a developing controversy over issues regarding the celebration of the city's 450th anniversary in five years. This last matter unfortunately will very likely get sticky when public and private monies are mingled without the public's oversight. Frankly, public "democratic" delegation of funds and programs isn't always advantageous. An example is a situation years ago in Sarasota, Florida when the public was asked what kind of public art should grace the front of the Public Library. Eventually an "arts advisory board" of mixed citizens and arts professionals overrode the citizen's choices and decided on a sculpture that they felt was aesthetically the best, in the board's opinion. It was either that or the commissioning of a cliched mural of jumping whales that the Sarasota public just loved.(Whales are usually not found anywhere near the Sarasota Gulf waters.) Delegation is sometimes important if the job needs to be done.
In 1986, Ron Powers wrote a book about the changes of his hometown Hannibal, Mo. a town in the midst of an economic slump. The plan was to change Hannibal into an amusement attraction featuring their most famous native, Mark Twain and his 150th birthday, as a way to revive it economically. But it didn’t work out. The town "became divided. The attraction was too big for the town. In the end, the scaled-down version was successful, but it was still tainted with the false promises." Listen to this interview and substitute St. Aug for Hannibal "White Town Drowsing" This book should be a cautionary tale for the city of St. Augustine and it's upcoming anniversary.Amazon
Posted by Karl at 10:11 AM