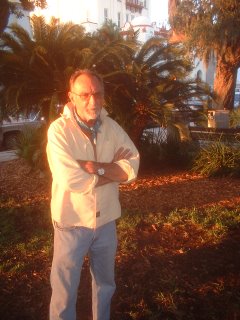 In the late 1950's Artist/Teamster/Teacher Richard Childs took a new California made Dewey Webbertm foam and fiberglass surfboard and paddled out to meet the waves at Vilano Beach. The teenagers on the beach were impressed that this guy was actually "STANDING ON THE BOARD !". The beach kids banished their "belly boards" to the garage or to little brother. This is when surfing as Duke K. did in Honolulu, began on the North Florida coast.

Today, 72 year old Richard still body surfs on the same beaches. "Since I was well into adulthood when I started surfing in Florida I never got into the 'surf culture'. I thought of surfing as a solitary sport......... still do". Richard says that favorite thing was to surf through the pier pilings at St. Augustine Beach. "They won't let them do that now."he says.

You can find the artist Richard Childs on weekends at the Plaza De La Constitucion. He prefers to exhibit and sell his work in the cooler evening hours. Many times he has come straight from the beach with his hair still damp. Childs sells original framed works and small sculptures somewhere around the gazebo. Stop and look.
Posted by Karl at 9:48 AM