¡Somos fregados! We Are Doomed to Hell ! 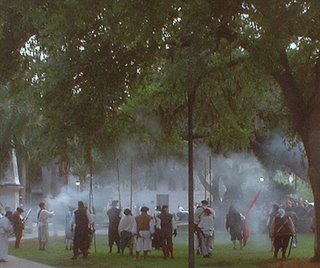 Every now and then some St. Augustine citizens don their 17th century costumes and recreate an event from history. This photo was taken during Drakes Raid in June of 1586. After pillaging the abandoned town , he swiped the garrison's payroll of 10000 ducats along with 14 bronze cannon. No injuries ( other than a few hangovers ) were reported in the latest raid.
Posted by Karl at 8:49 AM