Oh No ! Father Murphy Is Next Door. 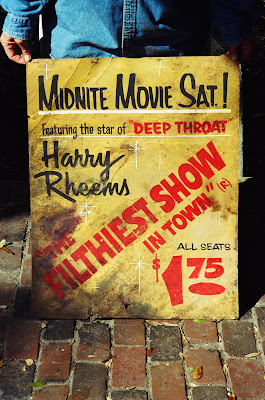 In 1973, sixty feet from the Cathedral Doors of the nation's oldest Catholic congregation, this film was being shown at the local movie house located on Cathedral Street where the Greek restaurant is now. Workers recently found this poster up in the attic. A little research shows us that this Rheems guy ( we are pretending that we never heard of him )was a well known porn actor who later changed his last name to Reems, joined a church, went through a 12-step program for booze, got married and settled down. He now owns Reems Real Estate in Park City, as well as the Harry Reems Athletic Club. If you would like more information on the film or the actor..................here is a link.

Our city is chock a block with history,yeah?
Posted by Karl at 2:37 PM