The Power Of Ink 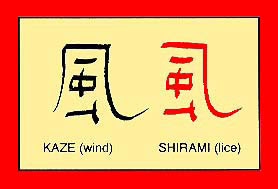 Japanese politician takes own life over a missing stroke in a cartoon (1992)
A cartoon published by the Asahi magazine in Tokyo, angered a Japanese politician so much that he killed himself in public. Shusuke Nomura was running for a seat in the upper house of parliament with his Wind Party, when Asahi published a cartoon with a single stroke missing from the word kaze (wind). Without that stroke, the meaning of the character changes to shira-mi, or lice, a rather undignified designation for a party. Nomura went to protest the cartoon at Asahi's headquarters. He stood up in the middle of a meeting with newspaper executives, said the traditional Japanese pre-suicide words for honor, bowed in the direction of the Imperial Palace, and shot himself with a pair of pistols.
Posted by Karl at 1:06 PM