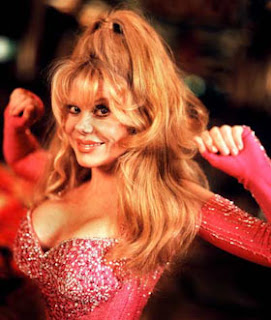 Charo
If the City of St. Augustine is wishing to fly in celebrities (The Pope, the King of Spain) to help celebrate our 450th anniversary we gotta throw in our suggestion. To some, María del Rosario Pilar Martínez Molina Baeza de Rasten a.k.a. Charo, epitomizes Spanish achievement in the U.S.A. Many do not know that she has been named "Best Flamenco Guitarist" in Guitar Player Magazine's readers' poll twice. Charo is spending a lot of time entertaining on cruise ships and would probably be happy to visit the Ancient City. Contact Charo through her web page here.

And for the ladies ......Antonio Banderas

Seriously, We believe that it would serve St. Augustine well by counter balancing the anti Hispanic factions in this U.S. It is there, be assured (read the previous post and here). Celebrate the Spanish heritage aggressively ,apply for the grants and use ten million dollars as they did in Jamestown this year.Forget about the Pope (he's German ) he doesn't really have a bedroom at the basilica as the tour guides say.
Posted by Karl at 5:56 PM