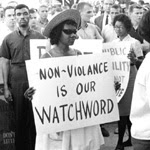 Florida lawmakers want to make it easier for segregation protesters like Hughes to clear their records of crimes borne of a determination to end racial discrimination. Proposed legislation would speed applications to erase such convictions past other pardon requests to the governor and state Clemency Board.

"Erasing convictions from criminal records is a small step toward forgiveness of an era that still causes emotional strain," said Gerald Eubanks, chairman of St. Augustine's civil rights committee as reported by the Associated Press.

"It did a great deal of damage. You will carry that for the rest of your life," Eubanks said. "If we purge all of this negativity we can get past it and move on. It certainly is good therapy if you can at least have a fair record."

AITM feels that the passage of this bill is a "no brainer", though we gotta say that these heroes may want to keep the convictions as a "badge of honor". Thank you Sister Rosa And Ms. Hughes.
_
Posted by Karl at 7:08 PM