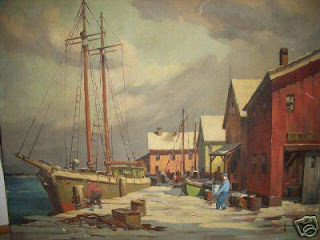 John Cuthbert Hare, 1908-1978, was a watercolorist who painted boats, seascapes and harbor scenes. He was primarily associated New England, especially Cape Cod, Massachusetts where he spent his summers from 1938 to 1965. However, he also lived in St. Augustine Florida where he was a member of the St. Augustine Art Association. It is likely Hare was born in New York City. He first studied commercial art in Brooklyn at the Pratt Institute.
Mr.Hare died in Palm Beach in 1978.