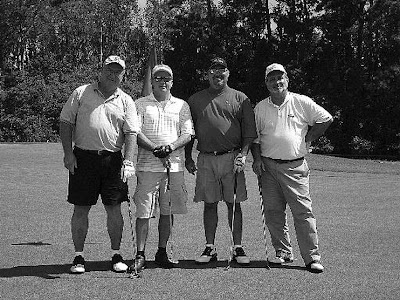 City Manager Bill Harriss (left) and city commissioner Donald Crichlow (right)share a round of golf with two downtown businessmen/ landlords.
Internal police department
memos:
From: Jeremy Masters
Sent: tuesday,December 23, 2008 12:07PM
To: Patrol
SUBJECT :PLAZA ISSUES
Just a reminder, if charges are warranted for those folks violating City ordinances in the downtown area such as Scott Raimondo & GregTravous,and others,and have been previously cited or charged , they do not get a free pass. They go directly to jail.
Thank you,
Jeremy A. Masters
Operations Commander
Posted by Karl at 5:14 PM