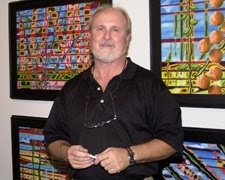 After the city approved the hiring of consultant Jeanne Zeidler , executive director of Virginia's Jamestown's 400th anniversary Joe Boles is quoted as saying "We don't have to reinvent the wheel, and we can hit the ground running." "Reinvent the wheel" is a popular expression used by the City Commissioners over 27 times in the year 2008 with Mayor Boles as the leader with nine usages. In over half of the mayor's use, Commissioner Erroll Jones parroted the expression by the time the meeting ended. We think that it was a nice touch for Mayor Boles to join two cliche's together with the "hit the ground running" thing.
First Draft of The Mayors New Year Speech
Found in wastecan at the Alcazar Room (CityHall)
"I'm hoping that the Commission in 2008 starts thinking outside the box, and frankly will push the envelope, developing a complete paradigm shift.We have a wonderful city and the city leaders can take it to the next level and not be drinking the Kool ade of the naysayers. Let's not look back one day and say that we took the genie out of the bottle and threw him under the bus.
No , I say , instead of blue sky thinking we've got to do whatever it takes when the rubber meets the road. So let's take the lipstick off the pig and be careful not to screw the pooch. GO GATORS!"
Posted by Karl at 10:09 AM