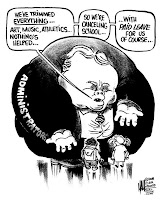 Mike Peter's Juan Valdez cartoon
Link on pics to enlarge
Today's news has a story that the a cooperative in Columbia is to file a 20 million dollar lawsuit against Mother Goose and Grimm's Mike Peters for defaming the country's coffee product and it's growers. Recently , here in St. Augustine syndicated cartoonist Ed Hall was furloughed from his job arguably as a result of a recent editorial cartoon criticizing educational budget cuts. The St. John's County superintendant is the touchy sort who feels that St. Augustine Florida is the center of the universe. He took offense at the idea that the nation's schools are suffering tremendous budget cuts while administration is bloated and teachers must sometimes dip into their own pockets for needed supplies. Somehow self anointed cultural nabob Phil McDaniel of the Cultural Council stepped to the plate with an editorial criticizing Hall's cartoon. This is fine.....this is America........provocative discussion is healthy and should be welcome. The local school superintendent voiced his displeasure with the cartoon. Hall is now out of a job...suspended (or something like that) Look, no one said that a privately owned newspaper must practice free speech but it surely should defend it. The comments by McDaniel should carry no more weight than any other citizen but he has shown himself as a champion of the status quo...he knows where the donors to his so called" Cultural Council" are and has a knack of kowtowing to wherever their plebeian whims take them.
The artists of Art in The Market had asked McDaniel to serve as a mediator in the "street art" controversy here in town. He has not responded and frankly we didn't expect him to as we have found he has no more administrative experience in the arts than the average citizen. Ok, we will grant that sending your kids to an Arts school in Jacksonville might make a resume, but that's pretty much it for "arts experience". Oh yeah, he plays guitar and likes to surf.
McDaniel........You cost an artist his job. In your editorial you used the term"defamation". You have in the past used the words "libel" and "slander" toward those that disagree with you. Drop the defensiveness . Frankly this statement to Hall completely baffles us ,"It's ironic that you would have used your artistic skills in defamation of the very subject that is one(of) the most valued in our school district."
Come out from your county paid office on San Marco and play your guitar in the Plaza. Get the hell away from your pretentious and supercilious so called cultural mavens They are not real and you to them are an uneccessary dalliance with a token handout. "Art is Foo-Foo." City Manager William Harriss ,August 08, City Commission meeting
Posted by Karl at 1:04 PM