We Are Not Performers! 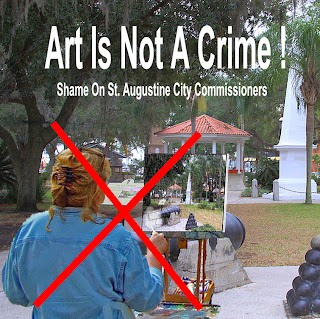 The newest unconstitutional ordinance against artists was passed in St. Augustine on Sept 14. The ordinance has yet to be published online. It has language that prohibits not only displays and sales of artwork on public property but also "the creation of artwork"within fifty feet of St. George Street and the entire Plaza and surrounding streets. This is the handiwork of "constitutional expert", attorney Michael Kahn of Melbourne Florida. Kahn gave the city commissioners two answers to the question posed by Commissioner Freeman, "Can an artist set up an easel and paint?" First he said directly,"No they cannot" and then he backpedaled and said that they can if it is not a "performance". Remember this.........the illegal ordinance states that no "artistry" is permitted and adds "creation of art" as banned. This is the essence of vague. A police officer now must decide whether the painter is "performing" or just painting. For this you paid the man Kahn 60 thousand taxpayer dollars? We believe that even city attorney Smilin' Ronny Brown could craft a clearer ordinance than this one without going beyond his salary.
Posted by Karl at 11:02 AM