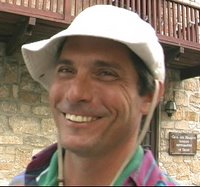 Scott Raimundo has been a visual artist on St. Augustine steets for over 10 years. Last Sunday, Scott had what someone termed a "mental meltdown". He was seen and heard (loudly) throughout the Plaza screaming over and over "I´M GOING TO RAKE YOU !",I´M GOING TO RAKE YOU ! ,while brandishing a metal easel over his head. The recipient of Raimundo´s tirade was another artist, Suvo. A tourist called the police and things calmed down before they arrived. Art In The Market would like to gently remind vendors and artists that we are highly visible in the Plaza and such behaviour is not good. Scott was reported to say later that " I had been drinking whiskey and eggnog all morning and afternoon". Suvo said " "I´m not sure what set off Scott but he sure got out of the wrong side of the bed that day". According to the St. Augustine Record , Scott had had a similar altercation with the police five years ago when the police had to get him into a headlock. Bystanders suggested to the police that Scott was "mentally disturbed". Such is the nature of many great artists. In his CV sheet Scott claims to have been born the same day that Vincent Van Gogh shot himself. This would make Scott 116 years old! Scott has written in his bio that he is" a visionary, a dreamer and a painter of big thoughts ". Art In The Market agrees, and we want Scott to continue his career and find Vincent´s passion without the traces of mental illness that Van Gogh exhibited. Our thoughts on Suvo.........well.....he is beyond redemption.
Posted by Karl at 9:02 AM