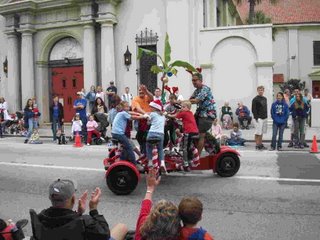 Sure this is Florida , though we are about 75 miles from the border of Georgia. It can get cold we can tell you, but when the nation gets an arctic blast we still appreciate the chilling 54 degrees. Some refer to us as living in South Georgia though we never hear of our Valdosta friends as being from North Florida. We believe that this is a dig into a perceived state of mind. It is no longer the 60´s although we´ve seen and heard remnants of the old bigotry but not as often as I did back in my midwestern hometown. Generalizations almost always lie.

That´s our friend David Saunders on his "Conference Bike". He and a gang of kids are passing the Basillica (First and Oldest Parish in America) while in the Xmas parade. David´s bike is an engineering marvel. Made in Germany with a Porshe steering system and dual hydraulic brakes it is a sight around town that brings out the cameras. David has had many interesting visitors on his bike, not celebrities or famous people, just interesting people. David is not impressed with fame (he lived in Manhattan at 33St and 33 Ave near PS 166 so he has seen it all.) Take a ride on David´s Conference Bike. He is not sure what to charge so take advantage. Hey!W e saw these guys sneaking onto St. George Street one late night. That´s the ride that we want.
Posted by Karl at 7:16 PM