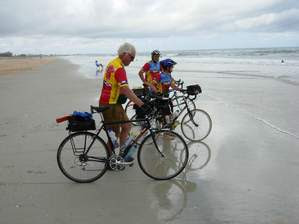 What Did You Do for Summer Vacation?
We do not know how we could have forgotten to tell you about these three Trukee California cyclists who were in the Plaza on 6/29. Nancy and Jerry Ives cycled 2900 miles across the country with fellow cycling enthusiast Norm Green. The destination was St. Augustine or rather the Atlantic Ocean at Vilano Beach. "Actually, these last two weeks across Florida have been the easiest part of the ride. Roads were better than most, often much like riding in a park. Twice we found ourselves on beautiful paved paths." said Nancy. They flew home on Monday after a two day visit here in beautiful St. Augustine.
Posted by Karl at 3:47 PM