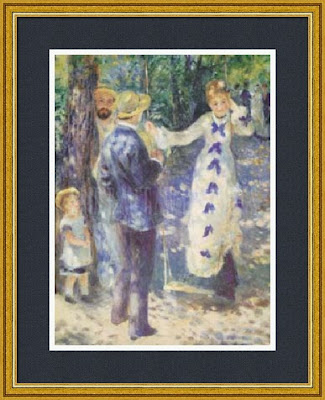 Regardless of the condition of the economy there seems to be a return of art print fraud every twenty years. Recently the authorities have become wise to the frauds perpetrated on cruise ship "auctions". A counterfeit ring has been recently broken up in Boca Raton where counterfeit Chagalls, Miros, Picassos and Dali's were distributed and sold. Once these prints are out in the market they float around for years. With a little knowledge some can be readily discerned to be fake while some take expertise to determine illegitimacy.

There are such works that can be we would term "legitimate fakes". The usual term applied to these works would be "estate authorized" There is usually an embossed stamp stating this. It is usually an edition taken after an existing work and sometimes signed by one of the artist's heirs (Picasso, Renoir). The above print is an open edition (unlimited) framed and matted at 39"x 31" Inside the frame is a reproduction, offset lithograph (like a magazine or baseball card). The cost at a retail shop is 199 dollars. It has been presented in a straightforward honest fashion. The purpose is to sell the frame.

Here is a 9"x7" version on ebay, unframed, unmatted the seller wants 220 dollars. Reading the description, contradictions abound. It is referred to as a hand colored etching.
This is what it is..........photo reproduction of a Renoir work that he painted on canvas and is now in the Musée d'Orsay. Reading this sellers B.S. Story about copper plates and information not relevant to the artwork you will see that this is a con. Looking at this seller's other artworks you can find the terms "signed in the plate"(meaning printed) and pencil numbered (by whom?). You also get a "gallery certificate" indicating that 2000 of these were printed (so far).

In Beverly Hills they sell fakes in a "high class" way. They have legitimately signed works...but who signed them? They mix the terms Estate signed" and "Hand signed" and ask 2000 dollars for a photomechanical reproduction signed by the painter's grandson Paul. Further down the page you will find the possibility of authentic Renoirs but study the provenance carefully. There is a "catalogue raisonne"that lists authentic Renoirs prints and this should be checked.

For the same price as grandson Paul Renoir's autograph you can go to a Christie's auction sometime when a serious print collector has put up works. You should be able to get an small original Renoir etching for about 2500 dollars plus 10% auction fee. The info on provenance should read like this: Softground etching, 1906. As issued in Kunst und Kunstler, 1909. Cupid watermark. Reference: Deltiel 12.7-1/4 x 5-1/2 inches.
So "Buyer Beware". There is such a thing as an "original print" but it is handmade and never a photo repro of a painting but is it's own media.
Calder, Chagall, Miro and Picasso, there are hundreds of thousands works on paper allegedly signed by these artists but are actually forgeries. Be wary. There are unscrupulous dealers and appraisors in the art field. Check out this guy who was recently indicted* by the Justice Department for counterfeit art. He is lucky that his wife is an attorney.
* an indictment contains only charges and is not evidence of guilt. The defendants are presumed innocent and are entitled to a fair trial at which the United States has the burden of proving guilt beyond a reasonable doubt.You might sit in jail for a long time if you cannot pay to get out. Mr. Bengis had the money.
Posted by Karl at 10:06 AM