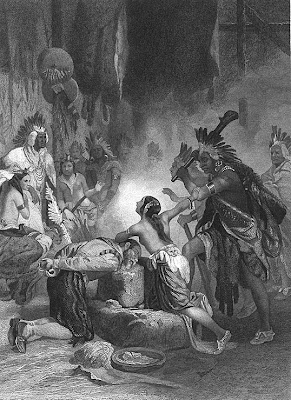 We now hear the media campaign paid for out of a 10 million dollar federal grant to celebrate Jamestown as the "birthplace"of english speaking America. Counter balancing this borderline ethnocentric push are stories like the one shown here:
From the United Kingdom Economist article on May 3

"This year's is not the first observance of the Jamestown settlement, but it is trying to be the most balanced. The 250th anniversary in 1857 was a statewide affair in which the General Assembly boldly declared Jamestown the birthplace of the nation—overlooking the fact that St Augustine, Florida, a Spanish settlement, was established 42 years earlier. In 1907 Virginia, with federal backing, staged a huge but poorly-attended exposition that presented Jamestown as a white Christian beachhead in a land of godless red savages. It also featured the Great White Fleet, the armada President Theodore Roosevelt would dispatch on a global tour: a new, Americanised symbol of imperial ambition. Much the same notion launched Jamestown; but ambitious nation-building is a little out of fashion now. " More

Though we do not believe in such things we give out our congratulations to Plaza Artist Charles Dickinson for winning the Best in Show Award at the recent Art Association Spring Members Exhibit. Charles has been travelling lately going to invitational "paint outs". Last week he was one of 25 nationally acclaimed plein air painters participating in The 2nd Annual Great Paint Out in Port St. Joe. We haven't heard the results. "Paint faster! Charles....Paint faster! " Our suggestion is to acquire a Dickinson now in 2006. You can get medium sized original somewhere in the 800 dollar range if you catch him in a good mood. But hey! There's also 20 dollar signed prints available from him in the Plaza almost every weekend. Watch Charles at work. Ask him "What's with the hat?"