Pasha Buried In The Plaza 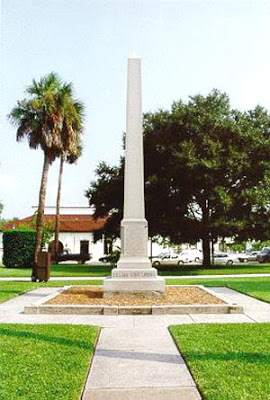 Born in North Carolina in 1818, William Wing Loring ran away at age 17 to join the War for Texas Independence. Reuben Loring (perhaps trying to prevent damage to William’s future career) soon showed up to collect his son, and the two returned to Florida. William then went on to be a Florida legislator , a wagonmaster in the old West, an Indian fighter, a Confederate General and an Egyptian Pasha. He is buried under an obelisk in Loring Park though no one calls it by that name. This is the park just west of the Government Building, the park with the empty koi pond. If you were sipping your Starbuck's at the Casa Monica coffee shop you would see the old General's grave. Here is a website dedicated to "Old Blizzards"
Posted by Karl at 7:45 PM