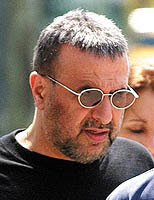 We were not here in town during October of 2004 but still ......Come On People!!. This guy was successfully passing himself off as Ringo Starr!? Doesn't Ringo have one of the most recognizable faces in the Western world? We could understand if you said "Hey , Isn't that the guy from the Sopranos?" (pick one) Let us hope that Joni Barkley, director of sales and marketing for Casa Monica didn't give away too many freebies. Jeez! Now that we know that he was an impostor lets not try to act like a bunch of star struck hicks again. Joni are you still there at the hotel?
Old Story Here and Here