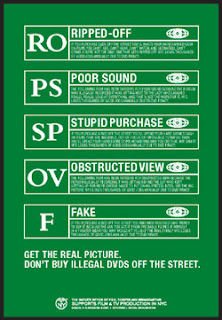 Dont' Buy Fakes and Counterfeits
A recent letter to a local paper stated that it wasn't right that the performers at Thursday night's concert in the Plaza could not sell their Cd's when the art vendors were there selling all around. This is a good question . We had previously discussed this with City Public Affairs Director Paul Williamson. He told us that it violates the City ordinance banning commercial business done on public property. We said that since the bands are "for hire" the city can decide whatever they want, but that Cd's and DVDs are fully protected under the First Amendment. City Manager Harriss' personal friend and golfing partner "Prince Pele"had no difficulty selling T shirts and leis at his "Polynesian Revue" in this years first Plaza concert. Our legal counsel "Rhuemy Eye"Bob on the Plaza bench says,"Them that does the hiring can say yea or nay." If it is permitted then it should be uniform

Yes, a display of Cd's can appear on the Streets of St. Augustine. An illegal ordinance is no law at all. Counterfeits and copies are another matter. As artists we are very conscious of copyright and it's protections. Sometimes we get overzealous as we did on Quigley's painting last week. We respect copyrights.

While we are at it, we wonder why the police give a blind eye to the jewelry vendors starting to display and sell around us. They ride their bikes right past the displays that we are told ...the City approved. Don't get us wrong, we are for free enterprise but visual artists (painting, sculpture, prints and photographs) have been arrested fined and jailed recently because the works were not on "canvas or paper "(it was tapestry). The items offered were hair barrettes and two others were jewelry items.This selective enforcement has been the norm. We will address this in the courts at a later date. We know Mastrovincenzo vs N.Y.C. at least as well as you do. We introduced it to you.
Posted by Karl at 3:49 PM