Art Was Welcome Then 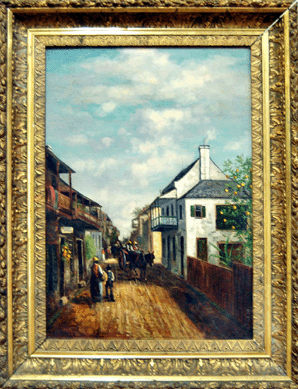 On April 27 At CRN Auctions in Cambridge Ma. an 1888 St Augustine, Fla., street scene with figures and a mule drawn wagon by White Mountain and St. Augustine Florida artist Frank Henry Shapleigh (Link) brought an exceptional $103,500, one of the highest prices on record for the artist. Mr. Shapleigh painted on the streets of St. Augustine and sold chromographs of his work to the tourists.* Shapleigh spent the winter of 1886-87 at the famed Ponce de Leon Hotel in St. Augustine, Florida, and later returned to become the hotel's artist-in-residence from 1889 until 1892, during which time this charming street scene was painted.
*Full of Facts and Sentiment: The Art of Frank H. Shapleigh. Concord, NH: New Hampshire Historical Society, 1982
Posted by Karl at 9:10 AM