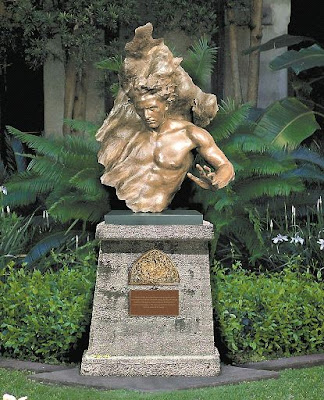 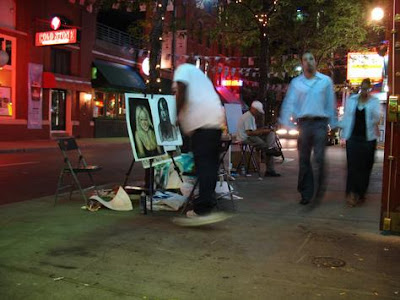 The City of St. Augustine has spent a considerable amount of taxpayer monies trying to eliminate street artist/vendors from the public spaces of the nations oldest city. Their alternative plans and insistence that we are "performers" indicates that both sides are miles apart.

"Mall Art" seems to be the rule in the galleries here in St. Augustine. "Dr Seuss" reproductions recolored in shades even Mr. Geisel would never blend will be sold next to the Cathedral. Check out the prices. 2000 dollars for a reconfigured and recolored copy of one of his originals.

A recent donation to the city of a Frederick Hart sculpture is appreciated ......BUT....... it is not to every one's taste. Losing the national competition,the outspoken Mr. Hart blasted Maya Lin's 1983 creation of the Viet Nam memorial wall " Maya Lin's design is elitist and mine is populist. People say you can bring what you want to Lin's memorial. But I call that brown bag aesthetics. I mean you better bring something, because there ain't nothing being served." Hart, the poor sport finally got his way and his traditional bronze of three soldiers was erected across the yard from the official monument. Time has shown us that Americans voted with their hearts and minds and most feel that Maya Lin's wall is one of this country's most powerful monuments.

The generous donor (100 thousand dollars) of Hart's sculpture fragment is a recent cancer survivor and this sculpture (purchased from the owner /dealer of the new Dr. Seuss Gallery and four others in St. Aug including The Thomas Kinkaid picture shop)) gave her comfort. At the recent City Commission meeting , it was interesting watching the sales technique of the gallery owner's son. I felt transported right into their viewing room (aka closing room). This kid would probably make a middling' time share salesman. Personally we think that the sculpture (see above) looks like a nude, hair gelled, Beethoven, in the midst of slipping on a banana peel while looking accusingly at us. It tells us......"watch your step, both in and out of the shower."That's my opinion lo, I'm but a dog. Mr. Cutter ,(Kinkaid dealer),i nstead of ordering new prints every March from the most popular booths art Art Expo in N.Y.C. try to get some of these.