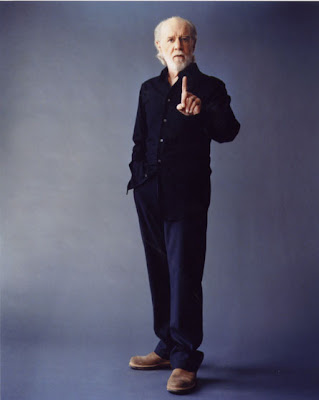 Actual conversation overheard on a NYC subway 12 years ago.

"Are you still seein' that girl from Queens?"
"No, we had a disagreement, she's skewed man!"
"You mean you han an argument"
"Not so much an argument but we have different views on things."
"Like what?"
"Nothing really, she was pretty good,..... kind and hot to boot but it didn't work out."
Waddya mean?
"Ok if you gotta know, we were watching George Carlin on HBO and she said that she didn't like him and didn't think he was funny. She said he was cantankerous and mean. "
That's it?
"Yeah how can I hang with somebody who fuckin feels that way. It's over man!"
Sounds like a Seinfeld script doesn't it?
Hear Carlin in his own words
Posted by Karl at 7:07 AM