Vague, Capricious and above all..Arbitrary!

The sign below has been altered for illustrative purposes 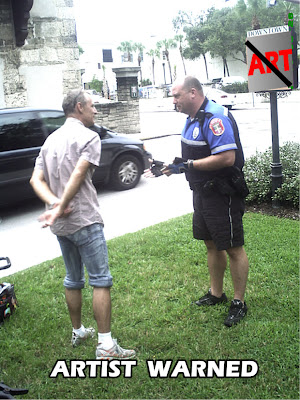 The Federal Courts have consistently ruled that visual art (paintings, prints and photography) is fully protected by First Amendment making public parks the quintessential location for free speech. Bery vs N.Y.C. Mayor Guiliani was forced to concede that display on public property was guaranteed by the U.S. Constutucion. He then argued that sales of these protected items (paintings and prints) are not part of the guarantees. The courts disagreed, citing an earlier case, Lakewood vs. Plain Dealer Pub that wrote “It is well settled that a speaker's rights are not lost merely because compensation is received;  a speaker is no less a speaker because he or she is paid to speak.”  Guiliani lost the case and appealed it to the Supreme Court who refused to overturn the appeals court decision.So, Why is it so hard for the City Of St. Augustine to honor the high courts decisions? "We have our own rules down here", said then Asst. City Attorney Whitehouse back in 2006. Since then, over twenty citations have been issued and three artists have been jailed on six occasions for exercising the rights that have been well settled by the Federal Courts.In May 2009 Federal Judge Marcia Morales Howard ruled against the city. The City of St. Augustine was forced to vacate all charges and pay the artists and attorneys over 80 thousand dollars for legal fees.

On Saturday, August 28th artist Suvo set up in the Plaza de la Constitucion and was approached by an officer who requested that he turn off the video cam, apparently wanting to speak "off the record". Since there was a non artist citizen witness there Suvo complied (big mistake) The officer then said that a meeting was held and it was decided that Suvo could display and sell but cannot "draw a crowd." (a ticket for violating the ordinance 22-6 was issued the previous month and was dropped when Suvo requested a court date for a hearing.) When asked what defined a "crowd" the officer stated that this was a "muddy" area. Suvo continued to display and tried to sell his art until the day darkened, about seven more hours.

The next day artist Dean Quigley set up his easel and a small rack of works for sale and as pictured above was told by the same officer from the day before that he is in violation of 22-6 ordinance and was asked for id and social security number. It  was put on record that he was warned and the next time he would receive a 100 dollar fine. This time as opposed to the numerous time in the past few years he was not told to leave.

Artist Scott Raimondo yesterday asked the same officer about the ordinance and was told that it is in full effect that the area of the Plaza was restricted and that no one can display sell or paint in the restricted area (covering 94% of the total area) The 75 dollar illegal permits are also not being enforced (until THEY want to).

The City is practicing arbitrary and capricious enforcement that is the very definition of vagueness. We call it "making it up as you go along." "An unjust law is no law at all ",St. Augustine of Hippo
Posted by Karl at 1:24 PM