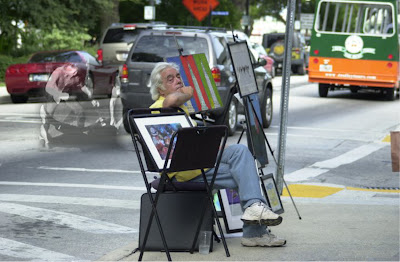 You can see on the left a ghostly image. This is a photo of local racist tough guys beating on the future U.N. Ambassador Andrew Young at that precise location in 1964


After spending time on the corner of St. George and King St. (from 3 pm to 9pm Saturday) I did some sketching and answered questions to only one person who showed any interest.That's OK, it was a pleasant day............until.

It turns out that though I am not in the Plaza which is prohibited to artists ,I was in violation of a different recently passed ordinance that prohibits him from being where I was and quoting a price. Display seems to be OK as previous tickets were dropped cause they didn't catch me selling (I do not sell very much, lately). It's interesting to note that my citation states that I was in the "West Plaza de la Constitucion". Again, the city or the police officer is creating new language for one of the oldest spots in this city. Loring Park is named after a one armed Confederate general whose remains are buried there.The officer is saying that I was in the "West Plaza de la Constitucion" aka Loring Park, when in actuality, I was across the street and half a block east as anyone who knows downtown St. Augustine can tell you from the picture above.

The one person who showed interest in my art happened to have been sent undercover as a tourist( Officer B. Ganmon) to get me to quote a price for my work......I did....., and the "paddy wagon "came as I was closing up at 9 pm. Two police officers, one uniformed and one in street clothes told me that I "may be under arrest and going to jail". I asked them to make up their mind cause I wanted to go home if they were not going to arrest me.After almost twenty minutes of the two consulting on the phone, in their car I was given a ticket for $100  if I pay it, or up to 500 dollars and 90 days in jail if I lose in court. I have yet been able out of 15 tickets to have this in county court.All previous tickets for the same offense have been dropped, though I've been jailed overnight four times out of those 15 tickets..I appaarently became a "safety hazard" after I quoted a price to the undercover lady.I was safe and not at all a safety problem.until I said "For you?,Twenty dollars" ......Suvo
Posted by Karl at 10:51 AM