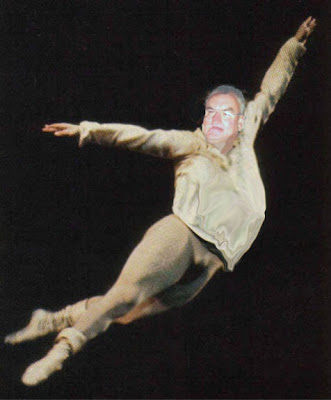 
Interviewer: At a recently City Commission meeting you said that "Art is foo foo" what did you mean by that?

Harriss: What I meant was that with my daily duties of running the City of St. Augustine and stuff, I don't have much time for artsy things. I leave that to my wife, you know, decorating and all.

Interviewer:. It usually means something that is inappropriate for a man....something effeminate...doesn't it?

Harriss: Yeah, I guess so. I had heard though that John Wayne collected dolls.

Interviewer: Well actually they were Hopi Kachina dolls, very important to their culture.

Interviewer: St. Augustine presents itself as an arts community yet there have been instances of jailing artists who have shown and sold on the streets. What about that?

Harriss: What about what?

Interviewer" The city's jailing of artists

Harriss: Look.....artists are in galleries, artists are in museums, artists are in art associations but I gotta tell you, artists do not belong on the sidewalks and in the parks. I've got a friend, a very important man in this community who owns four galleries around the Plaza and it galls him to no end to see those so called artists out there under the trees selling to the tourists. As City Manager I've got to protect his interests

Interviewer: Isn't he the man who sold the 100,000 dollar sculpture to a collector who in turn donated it to the city.

Harriss: I don't know. Did he?

Interviewer: Yes, he did. This was last week. You have no memory of this?

Interviewer: How about the artist's stance that the Federal Courts have determined that visual art is protected by the First Amendment?

Harriss: Look, the Bill of Rights , The Constitution ,The Emancipation Proclamation were all written hundreds of years ago. Times change. I read where America is a work in progress. Those old ideas about personal freedoms and rights don't fly anymore. I have a favorite expression "Your Rights end ,when mine begin". I think that Will Rogers said that. Gotta go