They Just Don't Get It 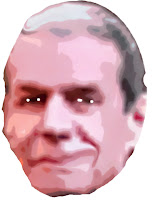 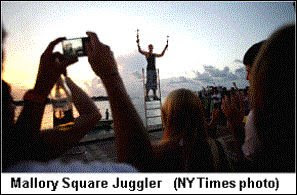 Commissioners endorsed a proposal by Commissioner Gardner to use the south half of our Colonial Spanish Quarter – recently closed off by the city Heritage Department – for street entertainers and artists, who have been banned from St. George Street and restricted in use of our Plaza.. Gardner said it will be up to artists and entertainers to organize and assist in developing a workable plan, “but I would think any profit-motivated business would be happy with the opportunity to set up off a street with thousands of pedestrians a day.”
so where are you now??


Where am I now? I'm in my studio off Moultie Road. I'll be in the Plaza next Saturday with my artworks. If you like one I'll sell it to you at a good price. Whoever said that we are profit motivated? We know that some may find it hard to believe but this is not our highest priority.
If you are to make this Spanish Quarter thing workable you will have to discuss this with a street entertainer. The visual artists already have their venues. The city has consistently confused the visual artists with street performers and at times with homeless vagrants. Like it or not, the courts (not our county courts) have confirmed that visual art (paintings, prints, sculpture and photographs) has full First Amendment protection. This includes display and SALE of such protected items on public streets, sidewalks and parks.
Your city administrators have already suggested Pomar Park as a venue. Do we need to discuss this with those who would make such a ridiculous statement?

The proposal of a lottery for spaces to sell full first amendment material has already been struck down by the federal courts as unconstitutional.
Just prior to Hurricane Katrina, artists in New Orleans were challenging the $15 annual fee.(when St. Augustine's was 1000 dollars) Permits are not required since Hurricane Katrina. Hats, donations and art sales are meager. Rather than use other cities as a model perhaps legal should find out if the other city's "regulations" are legal. Key West permits artists throughout the city for a 45 dollar annual fee purchased in the month of November only. The Key West Cultural Preservation Society founded by a friend of mine, Will Soto, administers the Mallory Dock area in Key West. This program is now a slick commercial enterprise that bears no resemblance (to) the original concept when I painted there in the late seventies. It has been privatized as a revenue stream for the city of Key West.St. Augustine can create a viable and constitutional model. Look to the (Federal) courts for guidance. We had forwarded a model ordinance over two years ago with a request to make a presentation to the commission. We were refused the opportunity to do so.

The Colonial Heritage Quarter locale for artists seems to fly in the face of the argument by city hired attorney Michael Kahn that we upset the historical ambiance of this ancient city. We are referred to as a "visual blight"" in his latest argument against our appeal. Again, we are consistently referred to as "street performers". We visual artists are very good at self policing and conscious of creating a good impression of our city. Controlling pickle bucket drummers is another matter.....not our job, Commissioner.The courts state that visual artists have a "bundle of rights" that street performers do not have. You are being mislead (and so is uninformed County Judge Tinlin) that if we allow visual artists we must permit all. This is absolutely not the case.Thank you for the Spanish Colonial Quarter idea bit the artists I know clearly understand where our rightful venue is and it is not there.

This proposal brings to mind Butler Beach where the African Americans were "permitted" in the 60's. seperate and away from public view.Mr. Gardner, we do not forget that you voted to have us removed from the majority of the streets in St. Augustine.