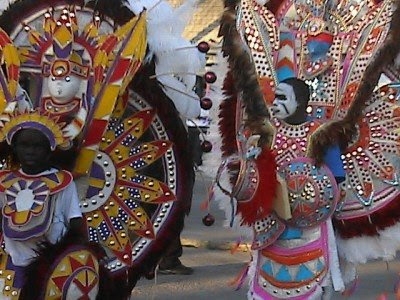 On Saturday May 16 the Plaza de la Constitucion will be filled with Bahamian music, crafts and food from 1 p.m. until 7 p.m. At 2:30 p.m., the sound of drums, bells, whistles, and horns will announce the Junkanoo Parade when authentically-clad Bahamian dancers and musicians “Rush Out” from the Plaza, down St. George Street and back again. The colorful and exciting “Rush Out” will be repeated at 5:30 p.m.

During the Revolutionary War, more than 17,000 British loyalists fled south from their former colonies to a safe haven in St. Augustine. Unfortunately for them, the Spanish re-claimed Florida in 1783 and the loyalists were evacuated. As a result, many former St. Augustine residents started their lives over in Abaco.

This sounds like a fun event put together by the well connected (St. Augustine Yacht Club, St. Augustine Airport Pilot’s Association) to raise scholarship funds for an Abacoan student to attend Flagler College.

With this and the artists back in the Plaza by court order, there will be some real "life" downtown again.
Posted by Karl at 5:40 PM