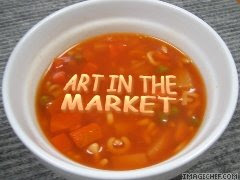 Q: Why are artists in court as plaintiffs against the City of St. Augustine?

A: The visual artists have been asserting their right to display and sell artworks on public property as fully protected speech. This right has been affirmed in Federal Court.

Q: So this means that visual artists may set up their kiosks or stands wherever they choose?

A:Please note that we are referring to "public property" specifically parks, sidewalks, playgrounds etc. Nothing in this set of rights permits blocking traffic, preventing orderly flow of pedestrians.

Q: Local governments are allowed to regulate this expression aren't they?

A: Yes. Legitimate and reasonable time, place and manner of the displays can be regulated. The key word is "reasonable". To allow government to arbitrarily limit such activity without specific narrowly tailored interests violates Constitutional intentions.

Q: How does government decide "What is art?"

A: That's the age old question isn't it? Government does NOT decide "What is Art?". In Bery vs NYC and Mastrovincenzo vs Bloomberg the question is "What art is protected speech?" It is a tough question but the courts drew a line recognizing almost anything as art (jewelry making. pottery etc.) but recognizing prints, paintings, sculpture and photography as purely fully protected speech ("a picture is worth a thousand words") In the words of the United States Court of Appeals: "to have equated the visual expression involved in these cases with the crafts of the jeweler, the potter and the silversmith who seek to sell their work. Bery, While these objects may at times have expressive content, paintings, photographs, prints and sculptures, such as those appellants seek to display and sell in public areas of the City, always communicate some idea or concept to those who view it, and as such are entitled to full First Amendment protection." (emphasis is by Art In The Market)

Q: Why do the artists feel that the law should apply only to them and not the jewelry seller or the hot dog vendor?

A: If the above answer did not explain why, another answer is that if we took the jewelry craftsman or the merchandise vendor into court with us we would likely not be successful since the courts have a separate body of laws concerning those wares. Also to have assimilated the street performers into our case would have been counterproductive. There is a marked difference in our philosophy as to "why we do what we do" compared to the merchandise vendor.

Q: What about "wearable art" like t-shirts or decorated hats? For that matter couldn't I simply paint something on a teapot and it is art?

A:To reiterate....The question is not "Is it Art? but is it constitutionally protected art? The courts had to do some difficult 'line drawing' in Mastrovincenzo vs. Bloomberg. This case goes into detail regarding utility as an object vs expressive content:

“almost every object can conceivably be interpreted as having some
expressiveness, and that not everything labeled or hawked as art [should be considered
expressive art"

This case was regarding decorated and hand painted "trucker caps". The Court also address the possibility of a subterfuge by vendors painting something on an object in order to claim First Amendment rights.

Q: The City of St. Augustine 's hired special counsel Michael Kahn who is quoted as saying that "The artists are hiding behind the first amendment". How would you respond to that?

A: Yes ,we are using the language and intention of the founding Father's First Amendment (there is a reason it is first) to defend our rights and yours. There are many far reaching effects if these rights are not protected.

Q: How is it that street art vendors know so much about the law? Commissioner Jones has twice referred to you guys disparagingly as "so called lawyers".

A: We are artists and art vendors who show and sell our works in publicly owned forums. It is as imperative for us to know the rights involved with our vocation as it is for anyone else. Mr. Jones gives credence to the City's lawyers and we have our own able counsel as well as our counterparts in other parts of the country.