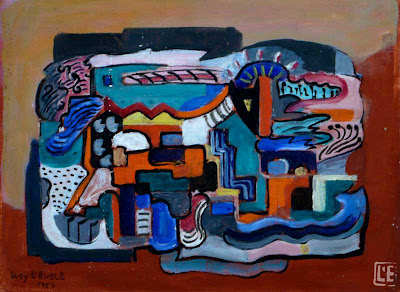 William J. L’Engle, Jr., was born in Jacksonville, Florida on April 22, 1884, a descendant of the Fatios, an historic name and prominent St. Augustine family

Lucy Brown L'Engle may have visited Provincetown as early as 1909 to study with Charles Webster Hawthorne (1872-1930) at his Cape Cod School of Art. In 1911 she attended the Art Students League in New York City studying with George Brandt Bridgman (1864-1943), and others. In 1913 she furthered her studies in Paris at the Academie Julian where she studied with the cubist painter, Albert Gleizes (1881-1953).

In the St. Augustine Record last Wednesday, columnist Becky Greenberg wrote about local artist and art advocate Jean Troemel. Jean Troemel has been on the St. Augustine arts scene since 1969 when she moved here. She is largely responsible for starting the Friday Night Art Walks here in town. There is a quote:

"When art went abstract in the 1930's and 40's, no one had to come to beautiful places to paint so St. Augustine lost it's former artists colony."

Oh, Ms. Troemel did you really say that?

"With few exceptions, the city's art community was unwilling to embrace the abstract expressionism that was de rigueur in more sophisticated northern art colonies, such as Provincetown, where the presence of Hans Hoffman (1880-1966) attracted some of the most famous and progressive American artists of the era. The Art Association's officers were out of step with their time and invariably sought to attract traditionalists......Many of the paintings produced by the group's artists -- for example, Fritz -- were unabashedly souvenirs for the tourist market, and there was a limit to how long such subjects as historic houses, shrimp boats, and the semitropical landscape could maintain the consumer's interest."

Torcia dates the end of St. Augustine's potential as a national art colony at 1950, citing conflicting business interests and the insistence by board members that the prevailing art be "traditional.

Perhaps one day someone will be totally honest and state that the artist colony label is sometimes another name for a group of well to do dabblers and dilettantes with outside incomes who would play at their selected medium. They considered the seasons as a verb, such as" I 'summered' in Rockport studying with ( insert name of a well known artist who charges big bucks for classes, with wine and gourmet meals of course) He is a genius!"

Take a look at the "workshops" in theback pages of any art magazine. Jealous?........yeah, a little bit, but by the third day I'd be wanting to get outta there thinking, "Yeah, but I don't wanna paint like Wolf Kahn!" or "Am I the only straight guy here?"or "Christ! I'm not gonna do meditative chants before breakfast or after either ...ever !"

Art Colony? The closest one I know is the Art In The Market artists who sometimes have to choose between buying a tube of titanium white or dinner. We work together to make sure that doesn't happen. That's a colony.